COP26: What to Expect from the UN’s Climate Summit

Ahead of COP26 in Glasgow, five sustainability experts across Nomura reflect on the issues that will be discussed to help the global economy reach net zero carbon emissions and keep the planet below 1.5°C

With just days to go until COP26 in Glasgow, Scotland, one of the most eagerly awaited climate summits since the Paris Agreement reached at COP21, we analyse some of the key issues that will effect change.

COP, or the UN’s Conference Of the Parties, is an annual intergovernmental summit where some 200 countries convene to set out climate priorities and assess the progress they have made.

The Glasgow COP is significant as countries will bring new targets on so-called Nationally Determined Contributions (NDCs), which set out the aspirations of each country for their climate actions. Together, these NDCs can be used to evaluate whether the world is likely to achieve the long-term goals of the Paris Agreement to stay below 1.5C. They are reviewed every 5 years.

COP26 will finally kick off after being delayed a year by the pandemic, and the leaders of China, Russia and Brazil won’t be in attendance. Still, that shouldn’t detract too much from its significance given the increasingly alarming science that unequivocally links humans with climate change and the prospect of unleashing environmental catastrophes if we let the planet overheat.

The urgency to act has also been ratcheted up by a report from the International Energy Agency that global CO2 emissions were 2% higher in December 2020 than in the same month a year earlier, driven by economic recovery and a lack of clean energy policies.

The summit has four goals: Securing net zero by 2050 and keeping 1.5 degrees within reach; Adapt to protect communities and natural habitats; Mobilise finance; and Work together.

Much of the discussion will occur mainly between governments and approved organisations inside UN-managed blue zones while public green zones will host a greater range of companies that want to showcase their efforts to tackle climate change. The nuclear power industry, for example, has been de-platformed from the more visible green zone amid contrasting views from various countries about the role it should play and whether it falls under ‘green’ taxonomies.

Under the finance umbrella, Nomura and its peers have a key role to play as the financial sector greases the wheels of the economy, helping to fund new technologies and support companies transitioning to greener businesses.

We take a look at 5 key areas that will put the planet on track to avoid climate disaster: Capital Markets, Carbon Pricing, Green Technologies, Decarbonization of Asia and Japan’s perspective as a heavily-reliant consumer of fossil fuels.

Capital markets have a critical role to play in mobilising finance to effect the transition towards a sustainable economy.

Green bonds have seen great momentum this year with inaugural issues from a variety of entities including the EU’s debut 12 billion euro green bond under its landmark Next Generation EU programme and Arabic Petroleum Investments Corp’s first ever green financing pivot towards renewable energy.

We forecast that annual green bond issuance over 2021 will reach $500 billion, bringing the $1 trillion per annum milestone in sight for 2023.

However, this is just the tip of the iceberg compared to the challenge ahead. The Global Financial Market Association estimates that $3-5 trillion of annual investment is required over the next 3 decades to limit temperatures rises to 1.5C and the financial markets will provide the mechanism: estimated 44% through loans, 35% through equity raises and 21% via bonds.

There are multiple taxonomy initiatives underway to clarify what classifies as green and transitional and to provide more clarity to investors and issuers on this critical aspect. Moves by many central banks, including the HKMA, European Central Bank or BIS, the “central banks’ bank”, to invest in green bonds alongside other types of ESG investors like pension funds, insurers and asset managers is providing very strong demand for green paper. If anything, the past year has shown a further increase in the pace of migration of assets under management towards sustainable investing strategies.

A further crucial area is climate transition finance instruments, which aim to fund the shift of ‘brown’ companies from hard-to-abate sectors of the real economy towards cleaner business models. This is where appropriately structured sustainability linked bonds and loans will have an important role to play.

More work needs to be done to clarify and create robust definitions that will bring greater confidence to all stakeholders who are concerned about ensuring that ESG-earmarked funding ends up supporting the companies who are on a meaningful and ambitious transition journey or have qualifying green assets.

This could be the carbon market COP. An area of great significance, and the last remaining area of the Paris Accord that needs agreement on the way it is implemented, is the mechanism to trade emissions offsets.

Carbon pricing and emissions offsets are major topics that need to play a role alongside global climate ambitions.

Effective carbon pricing in the economy is one of the strongest tools to drive changed outcomes, treating greenhouse gas emissions as a time limited resource. Pricing of carbon, and transferability through various markets will help the development of all net zero ambitions.

Article 6 of the Paris Accord allowed for the creation of carbon markets, but implementation processes have not been agreed. The aim is to frame a COP approved mechanism for trading carbon credits, which avoids double counting of offsets, and achieves an overall reduction in emissions. The overall reduction might need a process to automatically cancel a fixed percentage of exchanged offsets for example.

Alongside this discussion, there is growing complexity about national versus corporate interest in how offsets are used, and it is important that COP26 settles on the right overall frameworks and principles to be applied.

Green molecules such as hydrogen are essential to keeping within the 1.5°C scenario, and we are at the very beginning of the creation of cost efficient replacements for hydrocarbon heavy industries such as iron and steel, haulage, aviation and shipping.

We expect transformational changes in the coming decade, as the same powerful impacts of technology and innovation, ESG capital and public policy, which drove down the average cost of energy for green electrons generated from wind, solar and battery storage by 70 to 90%, align to create a green hydrogen economy at scale.

It will be difficult, it will be chaotic, there will be winners and losers, but it will be achieved because it must be achieved if we are to create a sustainable planet. Smart investors know this, and the recent increases in valuations of green hydrogen related companies reflects this belief in successful future cost-competitive solutions.

Given the scale of the challenge in Asia particularly around supporting economic growth while at the same time materially lowering carbon emissions, all eyes should be focused on mobilising finance to decarbonise the region.

So far, developed nations have failed to meet the targets set out 12 years ago in Copenhagen, to contribute $100 billion a year to developing countries, which makes the long terms task of mitigating climate change all the more difficult. The contribution agreed so far was $79.6 billion in 2019, according to the OECD, and the latest proposals suggest $100 billion may be achieved by 2023.

Rich nations may need to increase the overall pot and channel it more quickly to emerging economies where it isn’t commercially viable to switch to renewables. There is plenty of opportunity. Take Mongolia, which has hundreds of square kilometres of desert that would lend itself to solar power.

Indonesia is another case in point. It has an abundance of cheap coal but lacks the infrastructure to rely on gas as a transition fuel to easily reduce its emissions. It also faces logistical challenges to large-scale solar and wind. Instead, it requires financing for a range of potential alternatives such as geothermal, hydro and tidal energy. Small-scale nuclear also needs to be more widely under consideration and Indonesia is already looking at molten salt reactors, which provide a safer, more scalable nuclear solution.

Last year, Japan’s Prime Minister at the time Yoshihide Suga, declared that he would target carbon neutrality by 2050. To reach that goal, Japan will need to take the intermediate step of cutting greenhouse gas emissions by 46% at the end of this decade.

Japan has long had a low energy self-sufficiency ratio, of about 10%, and relies on fossil fuels for almost 80% of its electricity mix, making the target all the more challenging. Japan is responsible for about 3% of global CO2 emissions.

Nagoya University estimates that it will cost 165 trillion yen ($1.5 trillion) to achieve carbon neutrality by 2050 and various initiatives are underway as Japan aims to hit these targets. The utilization of financial and capital markets will be essential to secure funds, and multiple financial policies have been declared.

At a monetary policy meeting in June, the Bank of Japan (BoJ) decided to use market operations to address climate change. As a first step, the BoJ will provide loans in December 2021 to financial institutions that adopt recommendations from the Taskforce on Climate-related Financial Disclosures and disclose targets and results for investment and lending. We can expect a step-up in further initiatives like these to mobilise finance and encourage greener forms of energy. 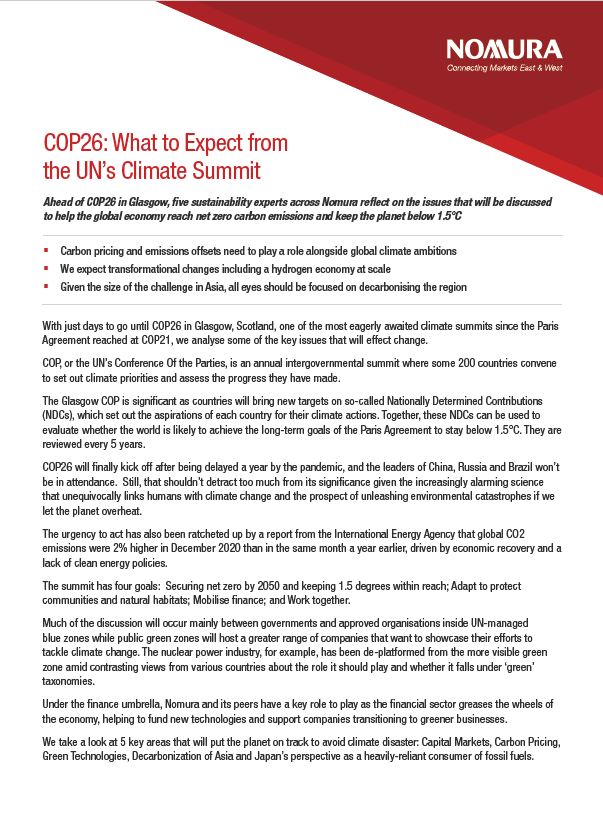