"Tell us about your career leading up to Enphase. How did you first become interested in sustainability?"

I joined Cypress Semiconductor in 1995 and for the next 21 years of my career, I worked on semiconductor process technology, chip design, and eventually moved into managing businesses within the company. The chip industry is a fascinating one, however, I always felt that I was one step removed from the end application.

During the early 2000s, SunPower Corporation was a subsidiary of Cypress Semiconductor and SunPower’s solar technology was far ahead of most in the industry. Although I did not appreciate the intricacies of the business, I was impressed by its astronomical growth. Much of Cypress’ valuation came from SunPower and in 2008, SunPower was spun off as a separate company. I continued watching SunPower over the next few years and started understanding its technology. Meanwhile, I felt the overarching urge to create products that directly touched the end consumer versus making chips which would go into someone else’s product, so I left Cypress in September 2016 and dabbled in a startup creating consumer accessories with USB-C technology.

I didn’t seriously contemplate going into the solar industry until early 2017, when I had the chance to meet with Enphase. The first thing that struck me was the company’s beautiful and sleek IQ 6 microinverter – a product which could last for 25 years, had 300 internal components, and cost around $50. IQ 6 microinverters were able to generate clean energy and save money for the homeowner, but Enphase was struggling with operational issues.

At that time, Enphase had just started working on the development of battery storage. It was clear to me that batteries added an important dimension to the solution. I thought it would be a massive opportunity if Enphase could provide homeowners with clean energy that would give them energy independence, so I joined the company. I jumped in and it has been a great ride.

We get even more excited every day about what we are doing. We just introduced our battery storage system for North America in July 2020. We are now making products that are fully delivering on our vision of better economics, clean energy, and energy independence for the homeowner. We are doing well financially because our products are differentiated, high quality, and most importantly, because we care deeply about customer experience. In addition, it is important that we make money in this process because it helps us further our purpose of “advancing a sustainable future for all.”

"You’re increasingly moving to be a consumer-facing brand. How important is sustainability to the average consumer making the decision to buy your product, and how will that change over time?"

Millennials are incredibly conscious of the environment and that is a great trend. However, there is still a gap between sustainability and cost savings. If we want consumers to change their thinking about energy, we need to give them a solution that both saves money and is good for the planet. Consumers need to see clear financial benefits before they take the leap. Today a solar system costs around $20,000, which is a lot of money. A storage system will add on another $15,000. I can’t blame consumers for looking at savings before sustainability.

We have seen the California blackouts and the recent Texas power shutdowns. It all comes back to one thing – we have freedom of choice in most of the things we do. However, when it comes to the energy that we consume, we still have our limitations and there is more work to be done, particularly with regulators. We don’t even know what freedom looks like in this respect. The concept of an energy system that allows homeowners to produce, store and consume their own energy whenever they want, is very appealing. However, the penetration of solar in the U.S. is only 3% and this needs to change rapidly with help from technology providers such as Enphase, policy makers and the utilities.

Let’s look at Australia where one in every three homes is solar-powered. The cost of solar in Australia is almost a third of the United States. Australia, and Europe have embraced solar in a big way and the U.S. needs to catch up. There needs to be both a financial component and a sustainability component. Anything that policymakers can do, like tax credits, is critical. The government has to do its part. Technology providers like Enphase have to innovate and reduce costs. Installers have to do their part by streamlining installations, finding better ways to do things, and spending less on customer acquisition costs. The local authorities under jurisdiction (AHJ) also have to do their part by streamlining permitting paperwork for such installations. Once these efforts happen, sustainability will dominate in the U.S.

"What do you see as Enphase’s role in the sustainable economy in 10 years? In 25 years?"

Enphase is a global energy management technology company, and we want to make the world’s best home energy management systems. When people think about their energy needs, we want them to think about Enphase. We want to be their trusted energy partner. Our goal is to provide a seamless experience for homeowners, which starts with building great products.

We are also working on a digital platform for installers and homeowners. The focus is on reducing friction for the installers by providing them with a one-stop-shop for all the services they need to run their business and serve customers. We want to take care of the homeowners all the way, from cradle to grave.

"What are the biggest obstacles to having 100% renewable energy in the US economy?"

The customers have to see clear savings before they commit large amounts of money. Everything in the chain has to become more economical and that’s possible through innovation – product and panel innovation, battery innovation, financing, and simplified permitting through digital means.

Technology companies need to innovate, policymakers need to keep the tax credits going, and programs like net-metering must not go away. 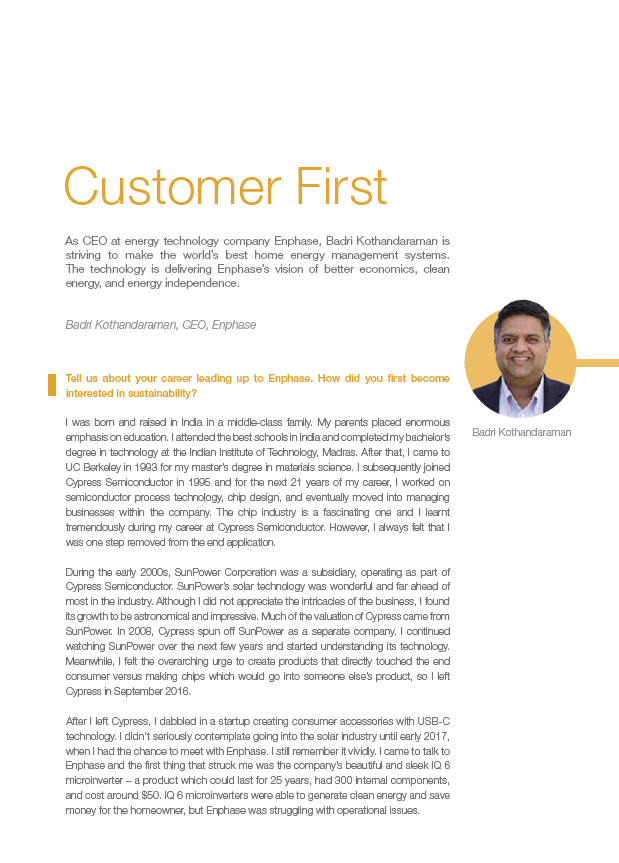 The UK’s Petrol Crisis - an Inflation or Growth Concern?