Lewis Pugh is an endurance swimmer, environmental campaigner and UN patron of the Oceans. He is the first person to complete long distance swims in every ocean of the world. He told Nomura Greentech how overfishing, pollution and warmer waters are threatening sea life.

What first inspired you to take up the sustainability cause?

I have been visiting the Arctic since the early 2000s when I left my career as a shipping lawyer. Enormous change is taking place there. My first big swim was in 2007 across the North Pole. At the time, world leaders said everything was fine in the Arctic.

In 2010, I undertook a swim across a glacial lake on Mount Everest and by that stage, the ice was already decreasing. It’s there one day and suddenly it’s gone.

I grew up in South Africa. As a university student, I saw enormous change during Apartheid, which had a big impact on me. Fellow students were arrested, lecturers spent periods in prison and there was a realisation that on the defining issues of our generation, you don’t keep quiet. It was clear to me that climate change was going to be the defining issue of our generation.

Some people think there must be a Damascus experience but it wasn’t like that. It was a gradual awakening - seeing various things around the world, putting the puzzle together. There was a famous Steve jobs speech at Stanford when he said you join the dots going backwards. My parents took me to lots of nature reserves as a child and we lived close to Addo Elephant National Park. I remember the sheer joy of these parks as a young boy. The seeds were planted there for me, that nature is essential to life on earth.

I’m 52 and in my lifetime we have lost nearly 70% of the world’s wildlife. It’s a dreadful indictment on us humans. We all have a responsibility to turn the ship around. We are not the only species on this planet.

In your capacity as UN patron of the oceans, you are aiming to protect 30% of oceans by 2030. How much progress is being made?

We now have 117 signatory countries. We are way past the halfway mark so it’s very exciting. That said, some big countries like China, Russia, Argentina and Brazil haven’t signed up while others with major coastlines like South Africa haven’t committed either. There are often competing interest like mining or the fishing industry acting as a barrier. Governments may issue fishing licenses to foreign fleets creating a reluctance from Treasury to protect these areas.

Less than 2% of oceans worldwide are fully protected. In the UK, less than 7 square kilometers is fully protected and recently the government talked about opening up more drilling in the North Sea.

You have been described as a human polar bear for swimming in sub-zero temperatures. What would that bear be most concerned about?

It’s clear that our oceans are under threat and three factors have come together to create a perfect storm: overfishing, pollution and the climate crisis. My first big swim was Robben Island to Cape Town in 1987 and on the beach were thousands of African penguins. Penguins are an indicator species. You can count them and they’ll tell you what’s going on in our oceans. Penguins are expected to be functionally extinct on the West coast of South Africa in the next 15-20 years due to overfishing, pollution (an oil slick can wipe out a colony) and the climate crisis as prey disappears so they need to migrate for food.

These three elements are everywhere. We have to reduce pressure on wildlife by banning fishing and oil tankers in certain areas. It’s essential for replenishing life in oceans.

I have been swimming in the Arctic for 18 years and each year I see the sea ice melt and get thinner. For polar bears, ice is life. We can protect 100% of the world’s oceans but unless we tackle the climate crisis, the Arctic and places in the Himalayas will melt and that will impact all the animals that live there. It raises the issue of justice between humans and the animal kingdom. I can’t imagine a world without polar bears – that would be incredibly sad.

Why do you swim in speedos and how do you bear it?

In September, I returned from Greenland where I did a 12 day swim in water so cold that when I opened the curtains on our boat, I could see icebergs going past. The cold burns your skin, it’s very painful. I swim in speedos to encourage world leaders to be courageous. The science shows that we only have a few years to get it right. For many people in the world, the climate crisis is happening now.

UN climate science body, the IPCC, recently said that the Arctic will be ice-free in the summer months by 2050. What are the implications if that comes to pass?

That may be too conservative. To the north of Norway is an island called Spitzbergen that’s 1000 kilometre from the North Pole. In the summer of 2005 I did a swim there and the water was 3C. I returned 12 years later and the water was 10C.

Ice is essential for life on earth as it cools our planet. The Albedo affect means ice reflects sunlight and when it’s gone, the sea, which is very dark, will absorb more light, speeding up the climate crisis.

How do you respond to those who say that we can’t just turn off the taps as renewables need time to scale up?

I’ve heard these arguments that we need a slow transition for many years. When organisations are suggesting a long transition, they are not understanding the gravity of the situation.

Last year in Greenland across the face of the Ilulissat glacier, which is moving at a speed of 40 metres per day in summer, we saw a mass calving – the process by which ice breaks off a glacier. Within a few hours icebergs were floating 100 kilometres out to sea. When people talk about a slow transition, you realise they haven’t seen the speed at which change is taking place.

Every leader is prepared to make promises for 2050 and some are making them for 2060 and beyond. Targets need to be much shorter and more ambitious if we are to keep up with the speed of change.

What can the finance sector do to make a bigger impact?

I would urge every sector in finance to wake up each morning and ask what they can do now to tackle the climate crisis. They can invest in renewables and divest from what endangers the environment. We need more financing for blue and green projects. 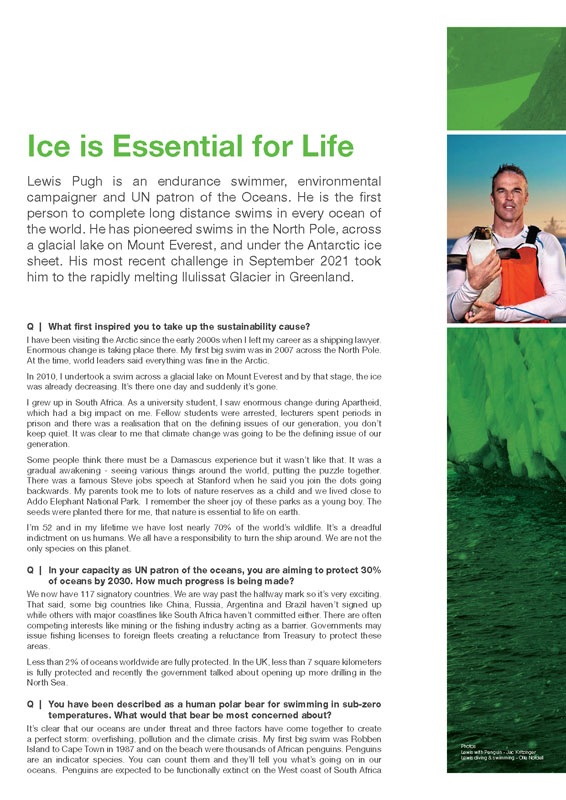 The Green Pivot - How an Energy Giant is Shifting To Renewables