A Win for Nature: Rules to Tackle Biodiversity Loss Start to Emerge

The launch of a new taskforce to protect biodiversity, highlights human reliance on nature to the tune of $44 trillion, and promises to shift financial flows to limit the damage.

It’s hard to overstate the symbiotic relationship between humans and their environment. Scientists predict that on our current trajectory of habitat loss and global warming, up to 1 million species are threatened with extinction, many within decades. Their disappearance would disrupt ecosystems and imperil human civilization as we rely on other species to make the earth habitable, for example, certain insects eat pests on crops, which could no longer fulfil a critical role in the food cycle.

The World Economic Forum recently put a number on that reliance. More than half of the world’s economic output – $44 trillion of economic value generation – is moderately or highly dependent on nature.

The data supports a growing recognition that the conservation of natural capital is indispensable not only for healthy human lives but also as the lifeblood of the economy. United Nations Environment Programme (UNEP) and the International Finance Group estimate that the loss of ecosystem services costs at least $479 billion per year.

Against that backdrop, the Taskforce on Nature-related Financial Disclosures, (TNFD), was officially launched in June 2021. Its mission is to develop a disclosure framework so that global financial flows shift from “nature negative,” which adversely impacts natural capital, to “nature positive.’’

The TNFD also formed an informal working group (IWG) and published a report called “Nature in Scope” outlining the steps to finalize the framework in 2023. G-7 Finance Ministers and Central Bank Governors issued a communique endorsing TNFD and at the G7 UK summit, world leaders adopted the 2030 Nature Compact, which aims to stop and restore biodiversity loss by the end of the decade.

The TNFD is co-chaired by David Craig, strategic advisor to LSE Group and Elizabeth Malma Mrea, executive director of the United Nations Convention on Biological Diversity. The election of Craig, an expert on data analysis at stock exchanges, underscores the desire to link the United Nations functionally with the finance industry and to provide disclosures that are useful to influential groups like institutional investors. The accumulation of better data to assess nature-related risks, is intended to accelerate understanding of these issues and shift global capital flows.

Last month the TNFD appointed 30 members from financial institutions like BlackRock, and major corporates like Nestle, plus data providers, and accountants to shape the framework.

The remit of the TNFD is to develop standards that promote consistent disclosure of nature related financial information at the global level. The IWG proposes to coordinate definitions between existing frameworks for biodiversity and natural capital conservation in order to minimize the reporting burden on companies and financial firms.

TNFD consists of four pillars: governance, strategy, risk management, and science-based indicators and targets. It will provide companies and financial institutions with a complete picture of their environmental risks. Refining and implementing the rules will play out across 5 phases. Phase 1, which represents the first draft of the TNFD framework, and Phase 2, which covers testing, will be completed in 2022 before launch and dissemination a year later.

The 15th Conference of the Parties to the Convention on Biological Diversity (CBD) is scheduled to be held in Kunming, China, this month, which could add impetus to existing initiatives. The meeting is being held in two parts with a new COP15 goal expected after the second summit in May.

TNFD has bold ambitions to turn the tide on nature’s loss. It bridges an important gap by pushing companies to protect biodiversity through their financial flows. In harmonizing TNFD with TCFD, we can expect the framework to be widely used by companies and financial institutions.

On the other hand, data on risks and opportunities related to the conservation of natural capital and biodiversity is likely to be more difficult to obtain, which could mean slow progress.

TNFD promises to disclose information that is consistent, comparable and useful as a basis for making decisions but as the field of natural capital is so broad, developing unified indicators may be challenging. Even if a company that reveals information based on TNFD can explain its dependence on natural capital and its degree of influence, it is important to decide at what level to collect and disclose the data on which it is based. 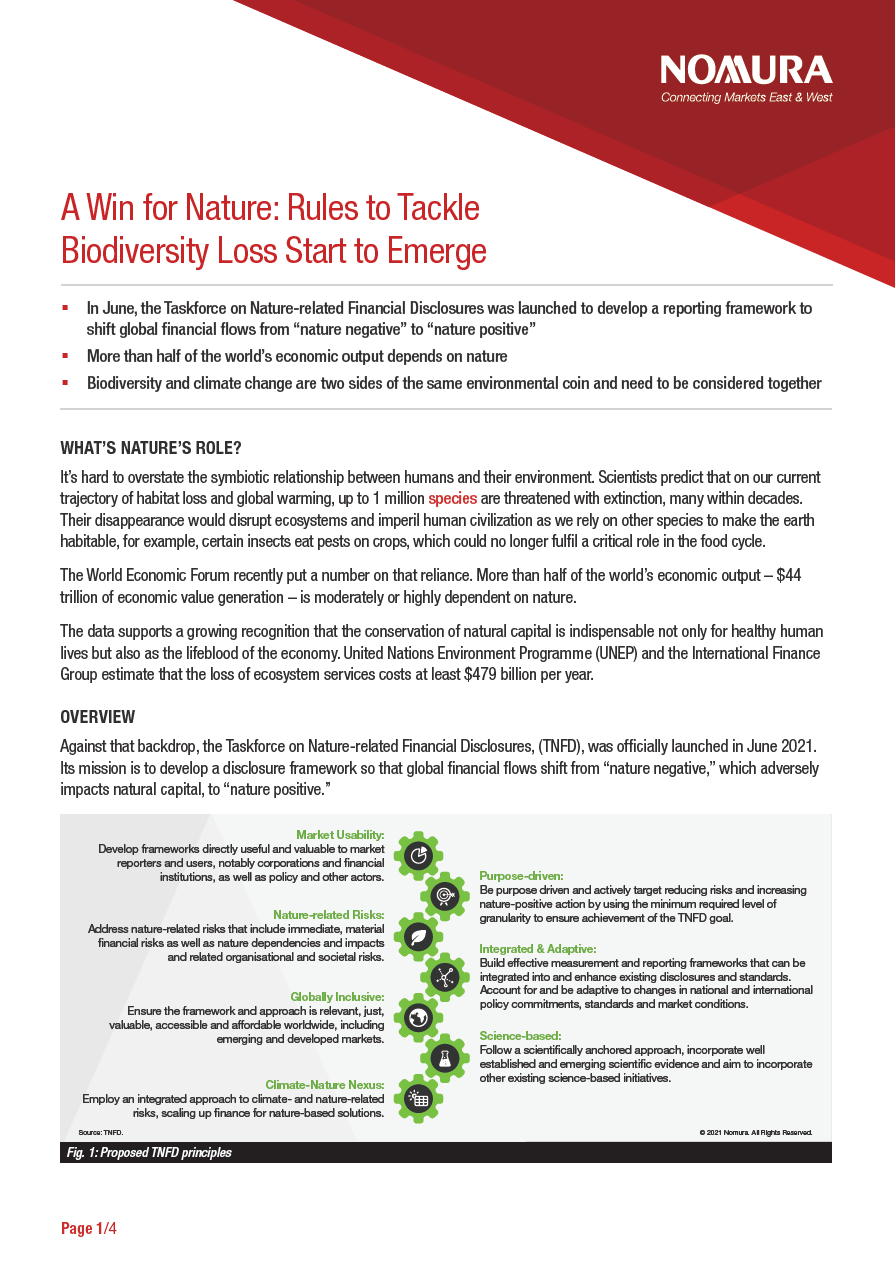