China committed to net zero by 2060 but what will it take to reach that goal for the world’s biggest energy consumer?

China has made ambitious commitments to the twin goals of CO2 emissions peaking in 2030 and carbon neutrality by 2060, the tightest timetable of any major nation. To get there, the world’s biggest energy consumer will need to harness green technologies to shift its power mix away from fossil fuels while transforming its industrial mix away from heavy manufacturing.

The impact of global warming has not only affected climate and ecosystems but it’s also threatening to reach various aspects of humans' social and economic lives. The Intergovernmental Panel on Climate Change cited risks that threaten mankind's prosperity and survival if temperature levels continue to rise at the current pace including: flood damage to large cities, food security threatened by rising temperatures and drought.

The 2015 Paris Agreement, which serves as an international framework for climate change, calls for keeping the rise in the average global temperature well below 2 degrees Celsius while making efforts to limit the rise to 1.5 degrees Celsius compared with pre-industrial levels. Secondly, it aims to achieve net zero carbon emissions by offsetting greenhouse gas emissions from human activities via natural carbon sinks, and negative emission technology.

Countries including Japan, the United States and Europe, have announced policies for achieving carbon neutrality, mostly by 2050. China, as the world’s largest emitter, has committed itself to the twin goals of CO2 emission peaking and carbon neutrality.

China has demonstrated to the international community its deepening commitment to the fight against global warming even as it increased its CO2 emissions during the process of developing into an economic superpower.

Under the 1997 Kyoto Protocol, China was designated as a non-Annex I country or developing country and was exempted from the obligation to reduce greenhouse gas emissions. In 2015, for its commitment to the Nationally Determined Contribution under the Paris Agreement, the Chinese government announced several goals including to ensure that CO2 emissions peak by around 2030.

In 2020, President Xi, in a video speech at a U.N. General Assembly session announced a new policy of achieving carbon neutrality by 2060. China also upgraded several targets from 2015: (i) reducing the CO2 intensity of GDP by more than 65% compared to 2005; (ii) increasing the share of non-fossil energy in the consumption of primary energy to around 25%; (3) increasing the forest stock volume by around 6.0 billion cubic meters compared with 2005; and (iv) expanding the capacities of wind and photovoltaic power generation facilities to more than 1.2 billion kW.

In 2020, China’s share of global CO2 emissions (30.7%) was significantly higher that its share of global GDP (17.4%). This reflects the facts that China has a very large heavy-industry sector, and that coal is its main source of energy.

The largest CO2 emission sources in China are energy-intensive industry sectors, namely, power generation, manufacturing, and transportation. In the manufacturing sector, heavy industries are the main sources of emissions, with steelmaking in particular accounting for around half of the total.

Carbon neutrality can be achieved through the reduction of CO2 emissions combined with offsets such as carbon capture for hard to remove emissions.

Decarbonization is set to bring many opportunities and challenges to China. Decarbonization will act as a catalyst for innovation and create investment demand not just in the energy field but across all industries. Governor Yi Gang of the People's Bank of China forecast that the value of annual investments necessary for reducing CO2 emissions in China will be 2.2 trillion yuan ($346.7 billion) in the 2020s and 3.9 trillion yuan in 2030 through 2060. CO2 emissions trading systems and green finance have a significant role to play in meeting these enormous funding needs.

In terms of challenges, China faces the difficult task of curbing emissions while increasing energy consumption due to its high economic growth rate. And as China's industrial structure is skewed toward heavy industries with massive CO2 emissions, China must drastically change its energy and industrial structures at the same time. That process will trigger bankruptcies and job cuts will be inevitable in declining industries. 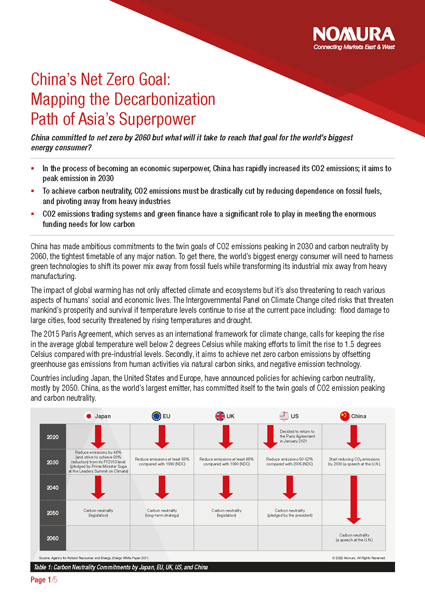 The 'S' In ESG: How Japan’s Employment Model Can be a Blueprint for a Post-Covid World