Wal van Lierop, founder and managing partner at Chrysalix Venture Capital, told Nomura Greentech that nuclear fusion is needed to power the future of clean energy around the world.

It started a long time ago when I was at university studying Economics. Two things really caught my interest: cost and system dynamics in the environment.

My interest in system dynamics was driven by the fact that I lived in The Netherlands, though I moved to Canada in 1995. Part of The Netherlands lies below sea level and requires a delicate system of dikes and water pumps to prevent the country from disappearing into the sea, which makes you appreciate what it takes to run an integrated environmental system.

Now that sea levels are rising, planning for increasingly higher dikes requires the community to work collectively more than ever because it is impossible to build dikes around everybody’s individual homes. You need to find the right balance between public and private initiatives to be successful. The important lessons from how the Dutch tackle their water-level threats can be applied to how we should fight climate change all over the world.

My interest was in how everything works together in complex systems – the economic impacts and the overall social and environmental elements of an intertwined system. Looking back, you could call it ESG 1.0.

How have you seen societal, investor and company attitudes change over the past year?

Over the past year in North America, we have seen enormous storms, floods and forest fires, most notably in California, but also in British Columbia, Alaska, and Northern Canada. North Americans have started to notice that something fundamentally different is happening to our ecosystem. They are still struggling to find the right answer, and that is understandable as societies go through cycles. More and more people in North America are starting to worry about the consequences of climate change. BlackRock’s Larry Fink, Mark Carney, the former governor of the Bank of England and Canada, and many financial institutions, industrials and politicians support action.

ESG investing has become very popular. But the jury is still out on what is driving its popularity. Is it a true concern about the “E” in ESG? Or is it because funds just started to divest from oil and gas at the right moment and reinvest the capital in the Big Five tech companies from Silicon Valley? It made these funds a lot of money, but very limited funds were reinvested in new risky technologies that could contribute to our aspiration to become net-zero by 2050. I am encouraged that slowly but surely, ESG funds are starting to go beyond reallocating most of their capital in Silicon Valley. High tech alternatives are starting to show more interest in investments in industries and companies that can have a significant positive impact on the environment, such as energy efficiency software companies, electric vehicles and related infrastructure, batteries, carbon capture and re-use, hydrogen and fuel cells, clean water and even nuclear fusion.

How important is nuclear in the energy transition, and what other technologies are you excited about?

I personally think nuclear is very important. We have achieved a lot with solar, wind, biomass, and batteries, but most energy executives and industry specialists now realize that when you have achieved 50% of the energy transition, you enter the more difficult applications to achieve the remaining 50%, i.e., providing heavy industry with the high temperature steam they need or powering mega cities where there is no space for solar or wind.

I hear the same from utilities, industries and politicians all over the world. Many have, under the Paris Agreement, committed to retiring coal-fired power plants by the early 2030s and are struggling to find alternatives that can help power-heavy industry (e.g., steel making, aluminium, cement, chemicals, etc.) and the vast growing megacities in Asia and Africa. Today they do not have credible solutions.

So, it is no wonder that the interest in nuclear is gaining popularity again. People are hoping that new versions of traditional atom-splitting fission plants will become safer than before, but public resistance based on the nightmare scenarios at Chernobyl and Fukushima remains very high.

People have hoped that Advanced Small Modular Reactors would assuage most concerns. However, even while they are probably safer, the key issue around fission is that once you start the process you cannot really stop it, and it is extremely difficult to control. Then there are still the much-published nuclear waste and proliferation issues related to it.

Yet, what gives me hope is the advancement in nuclear fusion, the safe version of nuclear that promises to provide risk-free, clean, abundant cheap energy everywhere with hardly any waste residue. It is truly the dream scenario of clean energy. There are now about 30 privately financed fusion energy companies racing to be ready for commercialization in the early 2030s by the time many utilities will need to retire their coal-fired power plants. Central in the fusion industry is the multibillion-dollar ITER project in Europe, funded by many OECD countries that is building a large-scale machine scheduled to produce 500 megawatts of net energy. From a scientific point of view, everyone close to it believes ITER will work. But, that is not feasible until 2040 at the earliest.

The big players in that area are Commonwealth Fusion Systems out of MIT, TAE Technologies in California, and the company I am invested in, General Fusion.

It will be an absolute game changer in the energy industry if any of these companies are successful. Nuclear fusion will provide abundant, safe, cheap, and clean baseload power. As soon as the first fusion plant operates in a technically and economically satisfactory way, we will see an inflection point and many others will switch to fusion.

What I am seeing with nuclear fusion gives me hope. The saying was always: fusion is at least 20 years out, and it will remain 20 years out forever. However, I am much more certain today that this will happen than I was 10 years ago, and that it will breakthrough in this decade. To those who question how small fusion startups with limited funding may be able to beat large well-funded international institutions like ITER, I say that 120 years ago, there were a number of international well-funded army and government-led institutions that focused on bringing to market the big innovation of that time – the airplane – but yet it was the Wright brothers, two guys in a garage, who flew the first plane! 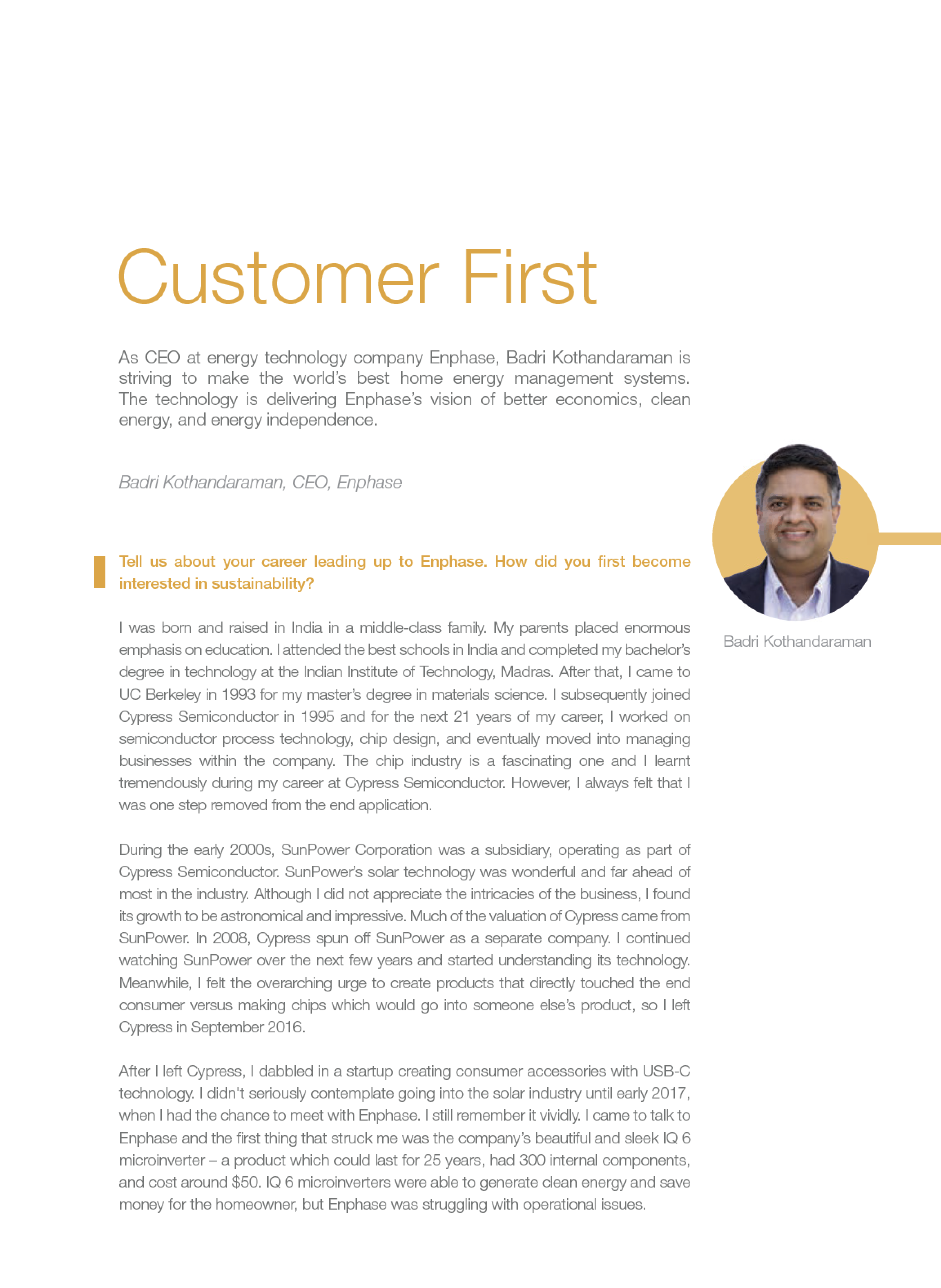 The ESG Revolution – Opportunities and Challenges for Companies and Investors

A Win for Nature: Rules to Tackle Biodiversity Loss Start to Emerge