Investors and corporates are looking to finance to tackle gender inequality in Japan.

Japan’s focus on gender equality in the workplace as one of the United Nations’ 17 Sustainable Development Goals, is especially critical as an ageing population and declining birthrate dovetail to create a sense of urgency.

As the world’s third-largest economy and home to one of the largest stock exchanges Japan’s financial markets play an outsized role when it comes to bridging the gender gap and driving the nation’s sustainability agenda over the medium to long term.

And while stakeholders across the Japanese government, industries, and academia are working towards creating gender equality, more needs to be done. In the World Economic Forum’s 2021 Gender Gap Index, Japan ranked 120th in the world, the lowest among Group of 7 countries.

For Japan to achieve a more sustainable economy and society, gender equality efforts must pick up pace, and the capital markets might provide the answer.

The rise of gender-related finance

Gender-related finance or gender-smart investing involves adopting an investment strategy that addresses the gap between women and men by deliberately and measurably leveraging capital to advance gender related causes.

Several global initiatives over the last decade have spurred the growth of gender-related finance. Among the most prominent are the United Nations’ Principles for the Empowerment of Women, and the 30% Club, a campaign to boost female representation at the board and C-suite level in the world’s biggest companies across more than 20 countries, including Japan.

On an encouraging note, the steady growth in gender-related investment since the start of 2020 is widely acknowledged to have increased focus on solving social issues, including gender inequality, during the pandemic.

What’s in it for investors and corporates?

The objectives of gender-related investment can include the following:

In a broad sense, investors want to achieve these goals to have a positive impact on the economy and corporate performance. Global gender inequality is estimated to cause about $160.2 trillion of loss to wealth per year. On the other hand, efforts to achieve gender equality could boost global gross domestic product by $13 trillion in 2030, according to McKinsey & Company.

From a corporate performance perspective, empirical analysis conducted by McKinsey shows the top 25% of companies with advanced gender equality on the executive management level will have a 25% higher probability of financial performance than the average of countries and industries where equality is in question.

For instance, Japanese pharmaceutical giant Eisai analyzed the correlation between ESG initiatives, and the price-to-book value ratio (PBR) based on its own data, and found that a 10% improvement in the ratio of female managers resulted in a 2.4% increase in PBR after seven years.

To make this a more accessible market, since 2010, financial institutions around the world have deployed several instruments to adopt gender-related financial practices.

The range of public market instruments based on gender is expanding to include mutual funds, exchange-traded funds, certificates of deposit, gender bonds and separately managed accounts.

When considering the investment balance of gender-related stock funds, there appear to be more investments in the finance and information technology sectors, and they are skewed more towards developed countries.

To be sure, gender-related investment into private markets is also increasingly popular, reaching about $6 billion at the end of June 2021, according to Project Sage by Wharton Social Impact Initiative. Venture capital, private equity, and debt accounted for the majority of the investment tools used in this market, while on a sector basis, healthcare, agriculture, and fintech were most popular. The United States and Canada accounted for the largest share of investment by country.

The Japan Impact Investment Fund No.1, which covers companies engaged in businesses related to childcare, school-age children, support for women’s empowerment, and work-life balance, is an example of a popular private market gender investment vehicle in Japan.

With all these instruments at investors’ disposal, gender-related finance is expected to play an increasingly central role in building a more sustainable economy and society in Japan. However, it is important to note that sustainable finance is based on the concept that social, economic, and environmental aspects of development must be integrated and not viewed as independent of each other, which means that ongoing efforts to combat climate change and correct broader inequality cannot take a backseat. 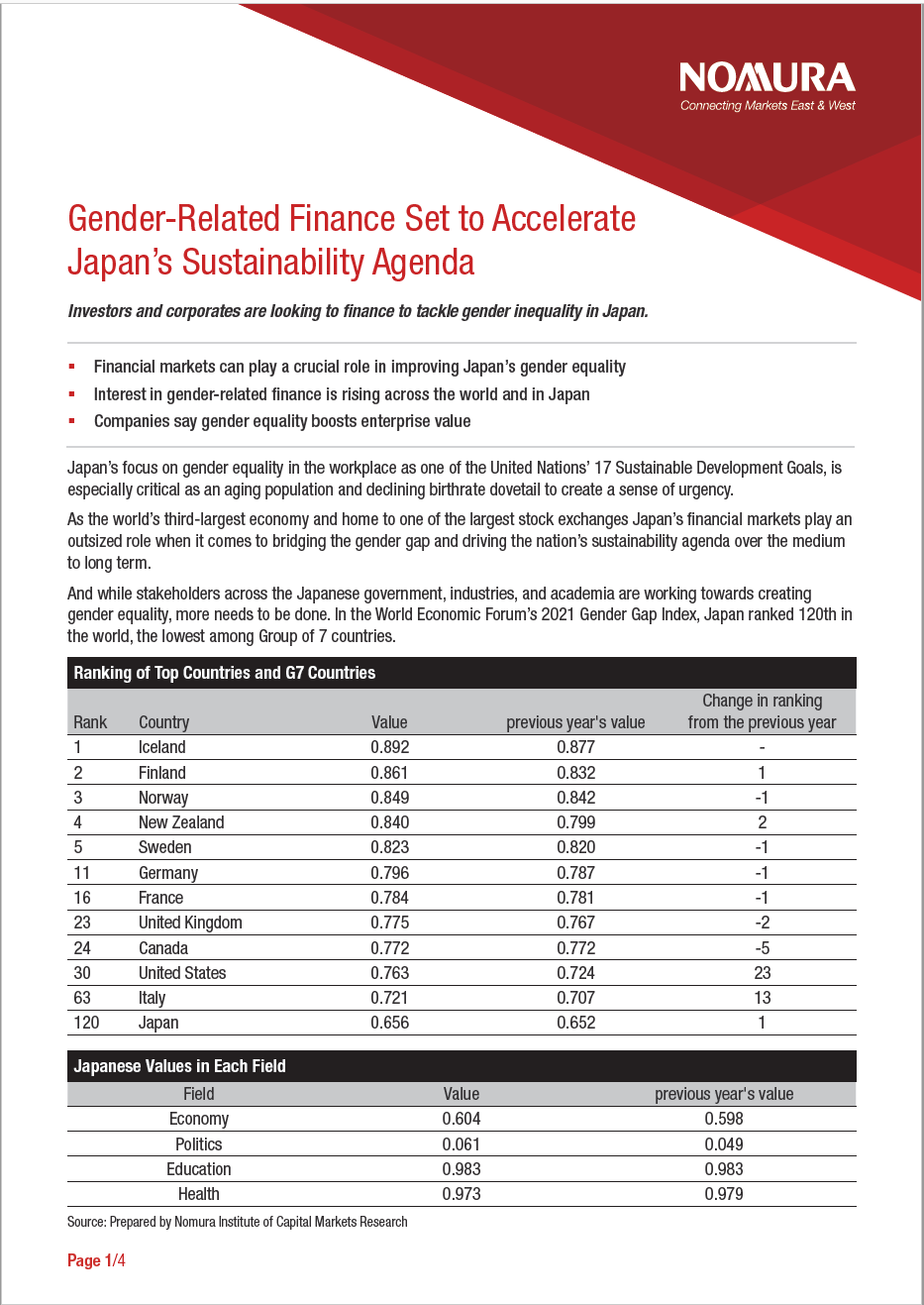