Japan’s Road to a New Form of Capitalism

Since the beginning of Prime Minister Fumio Kishida’s administration, the Japanese government has espoused the concept of new economic policy or a “New Form of Capitalism” to create a virtuous cycle of growth and distribution based on an economic governance model that emphasizes “sustainability” and “people” and leads to new investment and growth. In June, the government announced the “Grand Design and Action Plan for a New Form of Capitalism” to crystalize the concept in policy measures.

The Action Plan states that the idea of neoliberalism arose from the 1980s to the 2000s, and the global economy grew significantly as economic vitality was restored with the spread of globalization. At the same time, it states that countless hurdles have also emerged during that time, such as widening economic disparity, the worsening of climate change, increasing risk to economic security due to excessive overseas dependence, growing urban problems due to population concentration, and market failure.

It also mentions that the Covid-19 pandemic in particular has increased the risk management challenges facing each country, such as clarifying that it is not possible to ensure the health of citizens and economic security of the state via supply chains that depend on specific nations and regions, while the current Russian invasion of Ukraine has also revealed geopolitical risks to the international economy and rising challenges from authoritarian states.

In the past, economic policy in Japan has often been discussed in terms of two opposing axes: the market (private sector) and the government (public sector), but the Action Plan presents a new perspective: “Both the market and the government” will aim to solve social problems with large externalities that cannot be solved by the market alone.

The Global Debate of Rethinking Capitalism

In recent years, we have witnessed a global debate about capitalism proposing that neoliberalism is overhauled in favor of creating sustainable value. In particular, there are calls to change the trajectory from shareholder capitalism, which seeks to maximize
shareholder profits, to stakeholder capitalism, which holds that companies should create long-term value for all stakeholders, including shareholders but also customers, business partners, employees and local communities.

A notable example is contained in the 2018 annual letter to CEOs from BlackRock CEO Larry Fink. He argued that in order to prosper over time, every company must not only deliver financial performance, but also show how it makes a positive contribution to society for the benefit all of stakeholders. Another example comes from the World Economic Forum’s ‘Great Reset Initiative’ at the 2021 Davos meeting, which included the promotion of stakeholder capitalism.

In the same vein, Japan’s Action Plan aims to shift from a perspective emphasizing short-term financial gain (short-termism) to one pursuing long-term social value, with the goal of building economic systems that solves social issues. In doing so, it seeks to promote a multi-stakeholder corporate society that considers social and environmental impact, demonstrating that a focus on human capital, climate change and diversity is essential for sustainable business operations.

Traditionally, social purpose organizations have been financed through grants, donations and subsidies. In social finance, however, in addition to grants, various financial instruments are used, including loans, bonds, equity, and quasi-equity (subordinated debt). Social bonds are a common tool used to finance projects that seek to solve social problems. A sustainability-linked bond is a bond that varies financially and structurally according to the degree to which the issuer has achieved its ESG goals. In addition, venture capital and cloud funding are also used in social finance.

In social finance, innovative structures have also been developed that do not exist in conventional financial models. Social impact bonds - contracts with the public sector and government agencies - are a structure in which social service providers (social
enterprises and NPO) and investors pay for projects to achieve better social outcomes, while rewards are returned according to business outcomes. Also attracting attention is an investment structure called ‘blended finance’, which combines financing from both public and philanthropic investors and private sector investors.

Social finance is growing steadily. The outstanding amount of social investments in the UK reached nearly £8 billion at the end of 2021 (Figure 1). An important turning point for the development of social finance was the 2008 global financial crisis, which pushed the financial sector to make a greater contribution towards building a healthy society. Recently, the focus on social finance has been increasing via the global spotlight on ESG.

Challenges for Japan and The World Beyond

For Japan to develop a thriving social finance market, there are several challenges to overcome. A recent study from the Global Impact Investing Network (GIIN) shows that investors’ biggest concern is ‘impacting washing’, alongside the inability to show impact results. More broadly, a fundamental challenge is the lack of a commonly shared definition of social finance, making identifying economic activities with social impact more complex. This could lead to ‘social washing’, higher transaction costs, and adverse selection issues, which could hamper market development. But harmonizing the definition of social finance is more difficult and time-consuming than the equivalent exercise for green finance.

The role of intermediaries mediating capital in the social finance market is another important aspect of the market’s development. Venture philanthropy, also known as social venture capital, acts as an incubator or accelerator to support startups and early-stage social enterprises and to promote the growth of their businesses. However, even in the relatively developed European social finance market, the lack of intermediate support organisations is recognised as a challenge. Japan also needs to form a social finance ecosystem (Figure2) to attract consumers and businesses as a source of funds for social finance initiatives.

To summarise, Japan’s Action Plan considers the resolution of social issues a simultaneous socio-economic growth opportunity rather than an obstacle to growth. The development of social finance in Japan will play a key role in creating a new form of capitalism that builds economic and social systems to solve social issues. 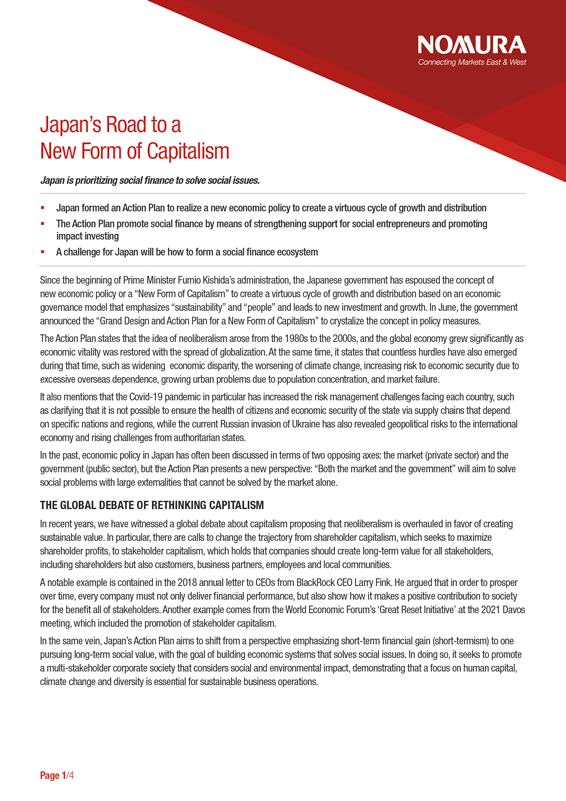 SDG 10 – How Social Finance can Address Inequality in Japan

How Companies Can Adapt to Counter Demographic Changes