SDG 10 – How Social Finance can Address Inequality in Japan

Japan faces challenges in achieving the UN’s Sustainable Development Goal 10: Reduced Inequalities, but sustainable finance can play a pivotal role in tackling the problem of income disparities among the elderly and single-parent households.

More than six years have passed since the Sustainable Development Goals (SDGs) were adopted by all United Nations Member States, at the heart of which is a common objective to end inequality and foster a “no one left behind” global growth story.

The Bertelsmann Foundation, which publishes updates on SDG progress, has noted that Japan needs to accelerate efforts to meet the goals, in particular Goal 10 – aimed at reducing inequalities within and among countries including across politics, institutions, taxation and finance.

NO LONGER A ‘ONE SIZE FITS ALL’ SOLUTION

In the case of Japan, a multi-faceted approach is required to meet this goal. Both central and local governments are playing an important role in combatting inequality, but a lack of public funds means more needs to be done. As the country’s birthrate continues to decline and the population ages, the burden of social security-related expenditures has become heavier year on year. Income redistribution through social security and taxation have contributed somewhat to redress inequality, but fiscal policy will continue to be an important facet in realigning balance between its people.

Japan’s Gini coefficient – a measure of inequality - has remained largely unchanged since the 2000s, partly due to the income redistribution tactics of successive governments, even in the face of factors such as an ageing of the population and an increase in the share of non-regular employment since the 1990s. However, Japan’s elderly poverty rate is the second highest among G7 countries after the United States, particularly among those aged 76 and over and among women.

WHAT ROLE CAN SUSTAINABLE FINANCE PLAY?

Social and sustainability bonds raise funds for projects aimed at addressing environmental and social issues, contribute to achieving the SDGs. The Social Bond Principles (SBP), published by the International Capital Markets Association (ICMA), provide examples of business categories for social projects for which funds are used, and ICMA has separately mapped the relationship between each business category and the SDGs. According to this framework, the ability to achieve Goal 10 is intrinsically linked to “access to essential services” and “socioeconomic advancement and empowerment.”

Japanese issuers across a wide range of sectors, including air transport, government agencies, railways, customer information management, and communications, are now demonstrating the relationship between the use of funds and SDGs through the issuance framework.

Even in cases where this relationship is not always evident, there are likely to be multiple uses of funds that contribute to Goal 10. Although still not as many when compared to other SDGs, it’s clear there is a role for social and sustainability bonds to play in achieving equality.

Historically, financial institutions have played the key role in combatting inequality through financing channels, but Public-Private Partnerships (PPP) using social bonds are another important avenue. Via this mechanism, governments can procure services and develop social infrastructure using private sector resources. Payment to the private entity involved is linked to the achievement of social impact. Social Impact Bonds were first seen in the United Kingdom in 2010 as an outcome of PPP, with a number of pilot projects taking place in Japan in 2015.

For Japan to achieve SDG 10 and contribute to the creation of a sustainable society, a meticulous approach is required to tackling inequality. More focus needs to be placed on enhanced corporate disclosures in order to better visualize inequality in and across countries. This, together with an increase in institutional investor engagement, will allow Japan to take further steps towards rectifying inequality.

SDG 10 promotes inclusion independent of age, gender, disability, race, ethnicity, origin, and religion. While various factors underpin inequality across and within countries, it is vital that Japan delivers tailored responses for each factor. Most importantly, Japan needs to tackle the problem of income disparity among the elderly and single-parent households.

Japan will be required to put in place innovative solutions, including securing private funds through enhanced tax measures, implementing public-private partnerships, issuing social impact bonds, and leveraging Sustainable Finance activities to achieve a more prosperous equal economy and society.rates are likely to need to rise to attract demand. Governments should also seek to improve purchase limits in order to optimise bond sales. More generally, governments must ensure the transparency of the bond issuance process, and seek to create an ongoing impact from green projects. 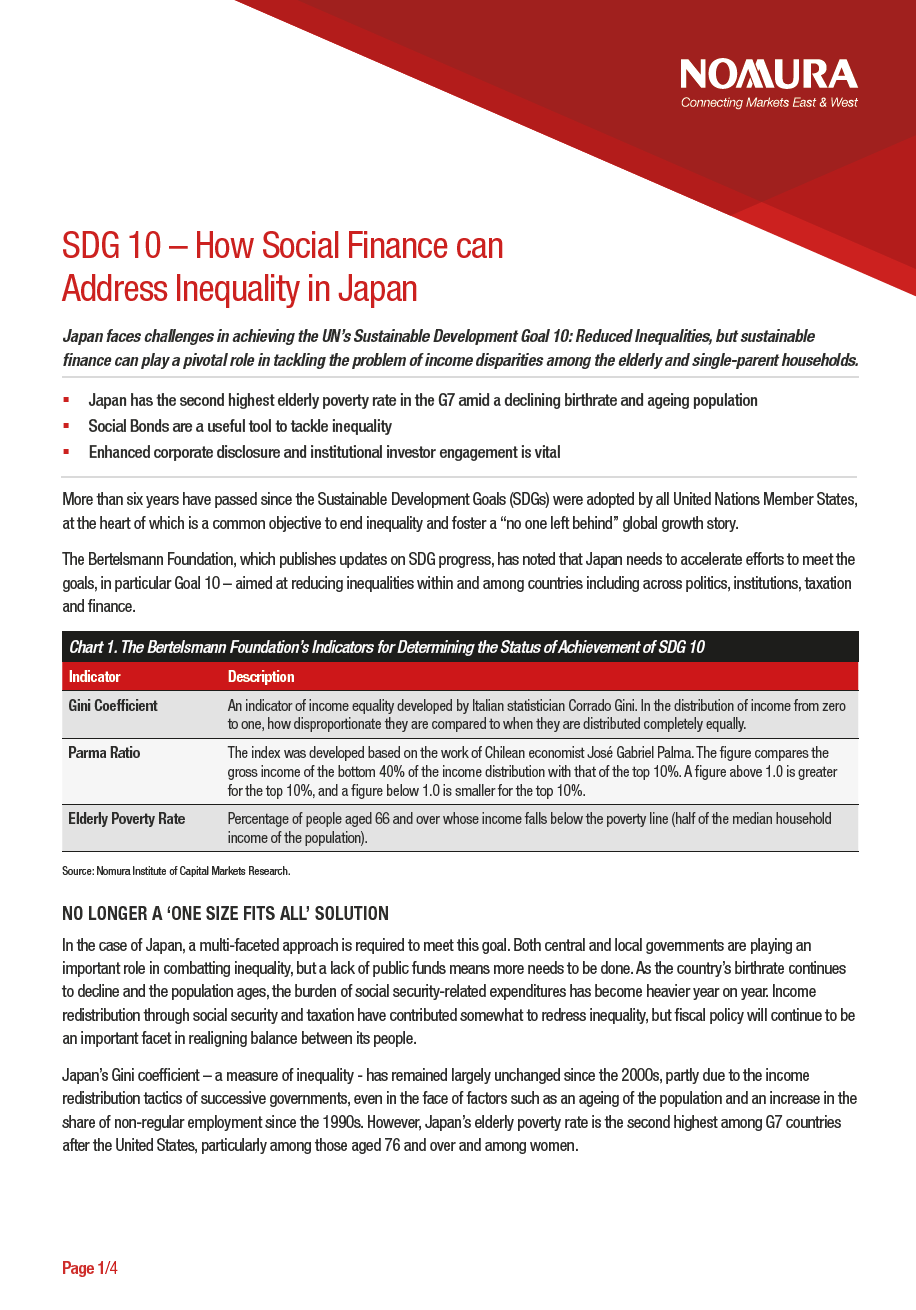 How Companies Can Adapt to Counter Demographic Changes