ESG in East Asia: The 'S' Factor - What are the Key Social Principles?

A research project between Nomura and the University of Sheffield’s School of East Asian Studies to explore the Social pillar of ESG with a particular focus on measuring employment in South Korea.

Why does ESG matter?

The survival of all forms of life on Earth is under threat. As humans, we are nothing if not embedded within and dependent on natural systems. Hand in hand with environmental risks goes the quality of our social, economic, political, and cultural life. There is a growing awareness that everyone on Earth has a responsibility for our collective wellbeing, particularly those in rich, high consumption countries.

In this context we are embarking on a bold project that ties the commercial expertise of Nomura with the University of Sheffield’s prestigious School of East Asian Studies to deepen and broaden knowledge about a comparatively underdeveloped area of financial services research: ESG in East Asia: The ‘S’ Factor. In particular, we will be measuring the employment component of ESG in South Korea.

We will publish a series of articles over the coming months, beginning with concepts, rationales and methodologies, and then moving on to presenting data and analysis on employment in different sectors and companies in the South Korean economy. We anticipate that, by doing so, we will enhance public and professional understanding of this fast developing area.

How has ESG developed?

Next to governments, corporations are the most powerful organizations able to effect change, and consideration for Corporate Social Responsibility (CSR) beyond shareholder value has a long history. Early UK examples include Robert Owen’s New Lanark Mill, Bourneville (Cadbury’s) and Port Sunlight (W.H. Lever). In recent decades public appetite for corporate action has also grown, with the 1970s boycotts of companies doing business in apartheid South Africa being a standout earlier example.

In Asia too there is a long tradition of stakeholder inclusion, with Japan’s model of welfare capitalism emerging in the inter-war years out of a combination of traditional values and firms needing to retain scarce high quality human capital. Early espousers of such an ethos were the 19th century capitalist Eiichi Shibusawa, and Konosuke Matsushita, who founded and developed the Panasonic brand.

By the late-20th century CSR had developed into an effort by firms to self-regulate, mainly in response to public demand for government intervention to restrain their activities. Within this atmosphere, firms also saw opportunities in CSR for building brand recognition and loyalty.

There is now widening acknowledgement that corporations are embedded in complex interdependent environmental, political-economic, and socio-cultural systems which they have profound effects upon, and which they gain from economically. Consequently, concern over their ‘socializing the cost and privatizing the profit’ has deepened. The 2008 financial crisis is a stark example of this in practice.

In the early 21st century Environmental, Social and Governance (ESG) principles have developed in financial services as a framework for more responsible investment, and have superceded CSR as a method for firms to respond to an emerging climate of increasing corporate accountability. Worldwide so-called ‘activist investors’ are becoming more influential as concerns grow, including in South Korea.

Demand for knowledge about companies’ ESG performance is therefore increasing among investors anxious not to condone or profit from destructive, exploitative or unjust actions conducted by companies on their behalf. Financial services organizations acting for investors and borrowers want to know about the reputational risks that listed companies face. Likewise, governments and international organizations want to align companies towards ambitious national and global targets, such as the 2015 Paris Agreement on climate change or the UN’s 17 Sustainable Development Goals.

Risk and Opportunity in ESG

Contrary to conventional free-market approaches that assume ESG hampers a firm’s ability to do business - and therefore its ability to benefit society through economic expansion - there is mounting evidence that the new 21st century ESG regime offers tremendous business opportunities. Awareness of risks, protecting the business against them, and capturing the upside of transformational technologies can significantly improve business and investment performance, particularly over the longer term. How?

Companies with strong ESG behaviours in the form of transparent reporting, proactive management and mitigation, and transformations to processes and products, typically enjoy lower cost regimes for capital and resources, and improved operational efficiency. These firms are likely to attract new, younger and more loyal customers. They are also less likely to encounter costly regulatory sanctions, and may attract the most creative and driven employees. All of this translates into improved financial performance over the longer term and higher investment returns.

Each of the three Environmental, Social, and Governance ‘pillars’ is divided into separate components that cover a range of issues, from carbon output, through charitable contributions, to executive board composition. These are measured, weighted, and combined to give each company an ESG scorecard.

Understandably, the main focus is on companies’ environmental performance and compliance. This is the most urgent issue facing humanity in the 21st century. Governance issues, too, are given significant attention. However, the social, or ‘S’ pillar has received the least attention from analysts and investors. This is also because there is less publicly available data, the data is difficult to decipher and there’s disagreement over what to include and how to include it.

ESG is more than just the latest attempt at identifying and insulating companies from risk. It is as much an effort at enabling responsible investors to capture the upside from 21st century transformations that are reshaping the global economy. It’s also about taking steps not to benefit from egregious behaviours. Indeed, a majority of investors now identify social or moral considerations as their primary motive for engaging in ESG investment.

In Part 2 we will focus on employment standards within the S pillar and show why it deserves special attention. 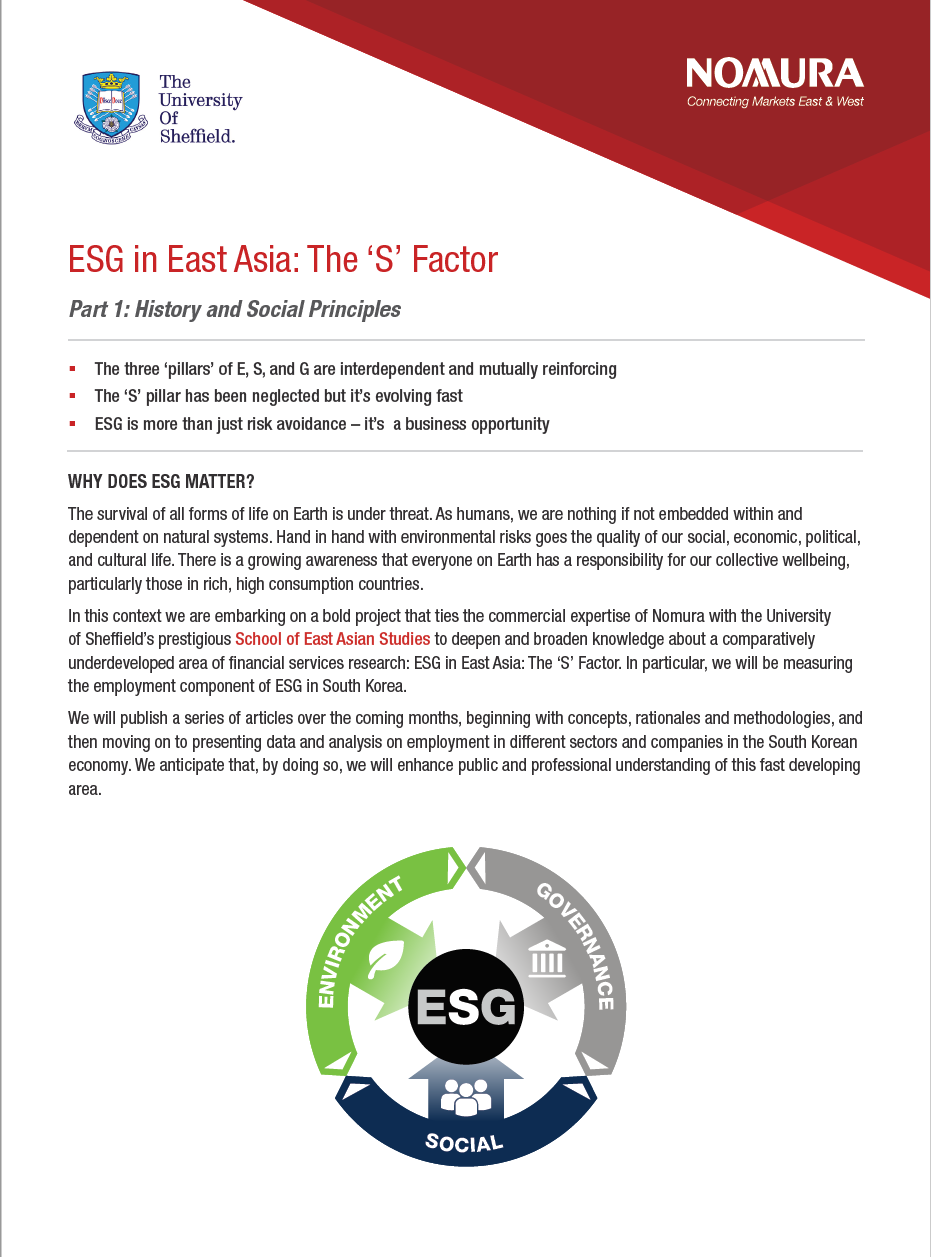