The advent of autonomous vehicles is the biggest game-changer for the auto industry in decades, according to an expert speaking at Nomura Greentech’s Sustainable Leaders Summit 2022.

There will be more change in the mobility industry over the next 10 years than the last 50 years put together the expert said at the conference, held under the Chatham House Rule.

Amid large-scale disruption of the auto sector, one statistic tells this story better than any other. In April the market capitalization of Tesla was $1 trillion, more than the top 10 incumbent car companies combined, according to data from S&P Capital IQ.

Innovation is a function of time and resources and since 2010, 94% of investment in Autonomous driving, Connectivity, Electrification and Smart mobility has come from external sources with just 6% from incumbents, according to the expert. That’s why advancements have been so rapid in electric vehicles.

The expert cited how during the height of the pandemic, one big traditional automaker terminated future investment into internal combustion engine and autonomous vehicles while keeping electronic vehicle investment alive. At the same time, specialist driverless vehicles companies like Google’s, Waymo, and Cruise doubled down on their strategy, widening the technology gap.

The economics of shared mobility will be substantially lower once vehicle autonomy arrives, he said, a factor that could further impact vehicle sales. For nearly 90% of the population in larger cities, those who drive less than 20,000km per year, it will no longer make sense financially to own a private vehicle. That’s because the driver is 70% of the cost of a taxi.

Self-driving technology is expected to start to become commercially available in the next 1-2 years, but it won’t address the majority of use cases until 2023-2027. Each city has to be mapped out and the machine learning software needs to be trained on each location. Waymo is unlocking cities in a phased approach starting with Phoenix, Arizona and then San Francisco.

Waymo has completed more than 20 billion miles across real world and simulated journeys – taking camera recordings from other vehicles – and added them to its software since its inception over a decade ago.

Driverless vehicles are currently monitored live by a control centre and are likely to remain so for the foreseeable future.

Commercial vehicles for autonomous goods delivery will also go in the same direction, a move that could eventually eliminate difficult jobs like freight driving that keep workers away from their families for long periods of time. The expert called the interim model, ‘constrained autonomy’, whereby the first mile and last mile are still conducted by a human. Driverless operations are only on highways with humans conducting load swapping on conventional trucks at transfer hubs across cities.

To be sure, the expert cautioned that the pace of driverless vehicle rollout will be determined by a number of factors including safety performance and the regulatory backdrop in different locations. Cybersecurity concerns and insurance approvals could also slow adoption.

Ultimately, though, beyond 2027 shared autonomous vehicles will be capable of driving during inclement weather, during the night and in rural, urban and city environments.

The future landscape will be one of competing ecosystems rather than individual companies, according to the expert, giving the example of GM owning stakes in ride-hailing service Lyft and self-driving car-maker Cruise. 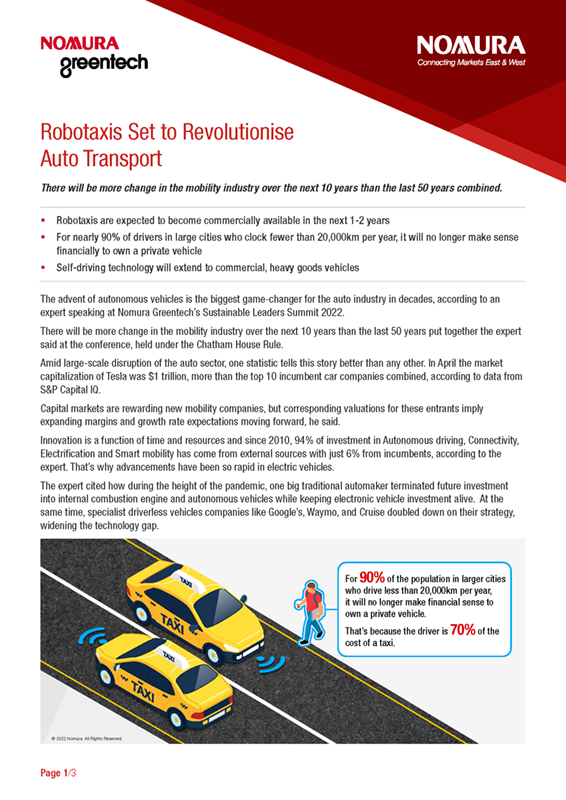