ASEAN countries have made significant advances in reducing poverty and improving human development but improvements in gender equality and social mobility have been slow.

The 10 countries of the Association of Southeast Asian Nations (ASEAN), like others around the world, are focused on achieving the United Nations (UN) 2030 Sustainable Development Goals. Within the region, various social issues are being addressed under the ASEAN Social and Cultural Community Blueprint 2025.

Considerable progress has been made in the region in reducing poverty and advancing human development. According to the World Bank, 74% of Indonesians lived on less than $3.20 per day during the period 2000-2002; by 2015-2017 this figure had fallen to 30%; in Vietnam the percentage on $3.20 a day fell from 71% to 8% during the same period.

However, there have been fewer advances on other social issues such as gender equality and social mobility. According to the World Economic Forum, the Philippines is the only ASEAN country among the world's 153 countries to rank in the top 20 in terms of gender gap index, for instance.

In order to address social issues, considerable investment is required. However, all governments, especially in the wake of COVID-19, face fiscal constraints. External capital is therefore required. Impact investment, which seeks to deliver a social and environmental impact in addition to monetary return, is becoming more important in this regard.

According to a survey conducted by the Global Impact Investing Network, about 30% of impact investors in the world invest in ASEAN,[ii] while cumulative impact investments in the region between 2007 and 2017 were $12.2 billion.[iii] By sector, financial services accounted for 44% of investment during this period, with projects to promote financial inclusion, mainly through microfinance institutions, a priority.

Within ASEAN, development financial institutions (DFIs) remain critical, accounting for more than 90% of cumulative investment between 2007 and 2017. Impact investment by private investors has grown but is still dwarfed by DFIs. This is expected to change given growing entrepreneurship in the ASEAN region and increased investment by young people who use technology to create socio-economic impacts. DFI and private investment differ in character: more than 80% of FDI investment is loans, while 50% of private investment is equity. Equity investments are primarily through impact funds, many of which are managed by Singapore asset managers.

The role of social bonds

Although private investment is on the rise, it remains small. Therefore, organizations addressing social issues have increasingly used bond markets to access a wider range of investors. The introduction of the ASEAN Social Bond Standards in October 2018 has been pivotal to the development of the market. The objectives of the ASEAN Social Bond Standards (developed in accordance with the International Capital Markets Association’s Social Bond Principles) are to improve the transparency, consistency, and uniformity of ASEAN social bonds.

ASEAN social bond issuers must be based in the region. Proceeds must be used for a regional project focused on basic infrastructure such as clean drinking water, sanitation, or transportation; essential services such as health, education, or financial services; affordable housing; job creation; food security; and socioeconomic development. Issuers are encouraged to seek external ratings and are required to report to investors on use of funds annually. Important ASEAN social bonds include:

How will the market develop?

There is currently insufficient investor demand for ASEAN Social Bonds. Barriers to growth include a lack of understanding of social and environmental issues, lack of historical data on investment returns, and inadequate information and transparency relating to issuers.[iv] Nevertheless, investor interest is growing. As of the end of July 2020, there were 48 ASEAN signatories to the UN Principles for Responsible Investment, with Singapore accounting for 31 of these. Of the total 48, 33 are asset management companies while seven are asset owners.

The COVID-19 crisis could be an important spur to further development of the market. In June, the Bank of the Philippines sold a PHP21.5 billion ($443 million) COVID Action Response Bond, which was increased significantly in size after a seven times oversubscription. Meanwhile, Impact Investment Exchange has announced its intention to issue a third social bond by the end of 2020, focused on helping women affected by the pandemic. The crisis has also encouraged investors to recognize the importance of sustainable investment to achieve stable returns over the medium to long term. 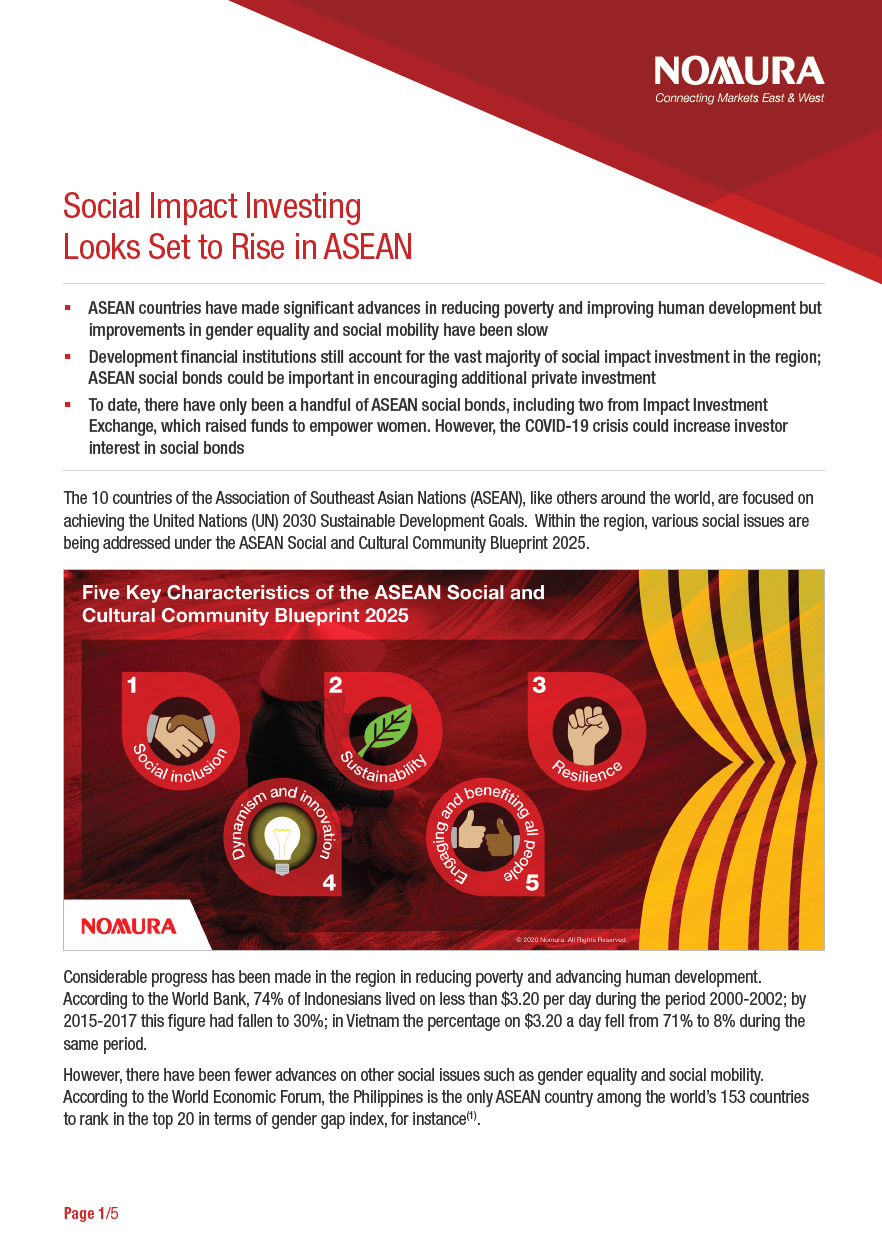 Jump to all insights on Emerging Markets

Japan: Side effects of support measures for corporations

What's on the horizon for the global economy?