The Future of Carbon Credit Trading in Singapore

Singapore’s new international carbon credit exchanges are a step towards reducing greenhouse gas emissions in a market with enormous potential.

Earlier this year, Singapore announced that it would allow carbon credits to contribute towards carbon tax payments from 2024, boosting the prospects for Singapore’s nascent carbon exchanges as the city-state seeks to reach Net Zero by 2050.

Greenhouse gas emissions in Singapore - one of Asia’s leading international financial centers – have been on the rise, reaching 51.6 million CO2 tonnes in 2019. To combat these emissions, in 2019 the government introduced a carbon tax for the first time in the Association of Southeast Asian Nations (ASEAN). Currently, about 50 industrial facilities are subject to a carbon tax, which covers about 80% of the country’s greenhouse gas emissions.

In February, the Singapore government said that it would allow high-quality international carbon credits to replace the carbon tax starting in 2024. Initially, carbon credits could replace up to 5% of the amount of greenhouse gas emissions subject to the tax, but the percentage could increase further in the medium to long-term, driving demand for carbon credits.

In the Singapore Green Plan, a comprehensive environmental action plan announced in February 2021, the government set the goal for Singapore to become a hub for carbon services by 2030. To meet this goal, The Sustainability Alliance recommended the establishment of high-quality carbon credit exchanges alongside the adoption of green standards and one-stop solutions for companies to measure, mitigate and offset their carbon footprint.

Behind this proposal lies significant growth prospects for the voluntary carbon market. Operated by the private sector, in this market carbon credits are purchased outside of mandated purposes to fund climate-related projects and support investments into emerging climate technologies. According to a report by the Taskforce on Scaling Voluntary Carbon Markets, global demand for voluntary carbon credits could increase 15-fold from 100 million CO2 tonnes per year in 2020 to 1.5 billion tonnes by 2030 and up to 100 times higher by 2050.

Singapore doesn’t have a cap-and-trade emissions trading system – often referred to as the compliance markets - as seen in the European Union, China, Tokyo and Saitama Prefecture; instead carbon credits are traded voluntarily. Singapore’s first international carbon credit exchange, AirCarbon Exchange (ACX), was established in 2019 in collaboration with the Singapore Sustainable Energy Association, a trade body in the sustainable energy sector, and is subsidised by Enterprise Singapore, a government agency that helps domestic companies grow. Thomas McMahon, CEO of ACX, has more than 30 years of experience in commodities and derivatives. He picked Singapore as it’s already a hub for commodity trading and due to demand for carbon credits from the airline industry as it works to reduce greenhouse gas emissions.

One of the main features of ACX is its use of blockchain to make transactions more efficient. ACX trades six types of tokenised carbon credits on the Ethereum blockchain. Automated smart contracts streamline transactions and enable T + 0 settlement, while transaction fees are as low as $3 per 1,000 CO2 tonnes. Carbon credits traded on the ACX meet international certification standards and are also verified by the British Standards Institute. They are rated by BeZero Carbon, a UK-based carbon credit rating agency.

ACX began operations by offering trading opportunities focused on airlines, but now has more than 160 clients including financial institutions, project developers and other key industry players. The volume of carbon credit token transactions on the ACX has been on the rise from January to August 2021, with the equivalent of 5.7 million CO2 tonnes being traded. ACX currently offers only spot trading, but it is preparing to offer futures trading.

ACX is rapidly expanding its international reach. In March 2022, it partnered with Carbon X, a local carbon project developer, to develop Indonesia's carbon credit market. It also announced a partnership with Abu Dhabi Global Market to launch a carbon credit exchange in the UAE capital.

CIX, A PUBLIC-PRIVATE PARTNERSHIP FOR CARBON

With a goal of re-energising the domestic economy following COVID-19, in May 2021 the government announced the creation of another international carbon exchange called Climate Impact X (CIX) under a public-private partnership. The CIX’s initial focus is on carbon credits generated from Natural Climate Solutions projects, which refer to the protection, management, and restoration of natural ecosystems and biodiversity. These projects have the potential to reduce greenhouse gas emissions by about 11 billion CO2 tonnes per year.

Similar to ACX, CIX uses blockchain technology, but also satellite monitoring and machine learning to enhance the quality and transparency of transactions. The exchange has three platforms: Project Marketplace, Auction and Exchange. Auctions effectively
aggregate the supply and demand of carbon credits to find the right price, and by early 2023 it’s expected that carbon credits will be traded on a larger scale under standardized contracts among multinational companies, institutional investors and financial firms. For third-party ratings, CIX has partnered with Sylvera, a UK-based carbon credit rating agency selected from its accelerator programme.

To establish CIX, the Sustainability Alliance engaged with more than 70 institutions on issues within current voluntary markets. The primary concern was that carbon credits are still not sufficiently reliable in quality because of multiple certification standards and processes. Using technology to conduct quality checks will be an important step in improving their future reliability.

In May 2021, Singapore said it was preparing to introduce a taxonomy and guidelines to enhance the quality of carbon credits. With this mind, CIX will collaborate with international working groups to ensure consistency with global standards, and help to further develop the domestic market.

Singapore first introduced a carbon tax in 2019. It applies to industrial facilities that emit more than 25,000 tonnes of greenhouse gases per year, which currently means that about 50 companies are subject to the tax, covering about 80% of the country’s greenhouse gas emissions. Singapore’s carbon tax is set at S$5 per tonne of CO2 until 2023, well below that of Western countries.

In summary, Singapore’s new international carbon exchanges and policy incentives could boost a market with huge potential and position Singapore as the leading destination for companies across Southeast Asia and further afield looking to offset their emissions through the voluntary carbon markets. 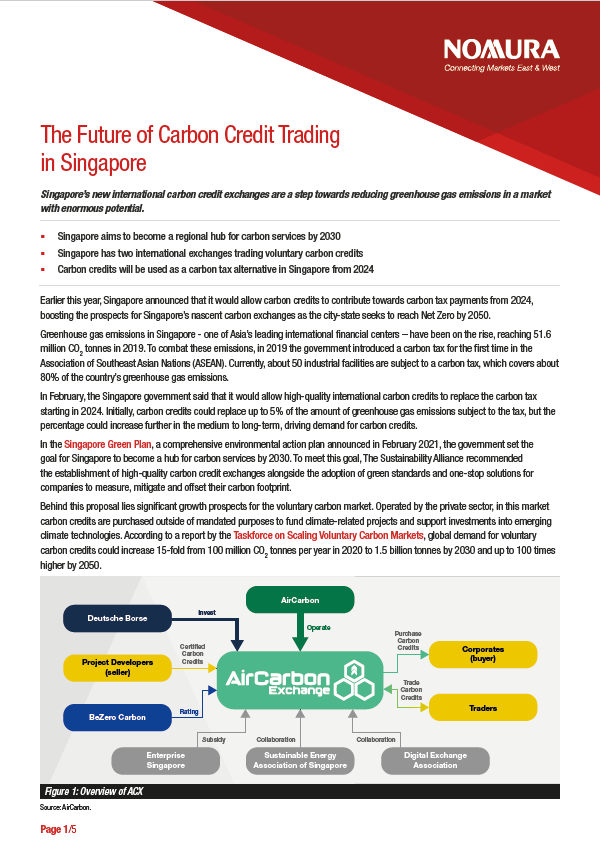 Climate Disclosure Rules Will Trigger ‘Race to the Top’