Making a Mark - The Emergence of Impact Finance

An unconventional branch of finance looks set to play a bigger role on the world stage amid a growing realisation that urgent action is required to meet climate targets.

In the world of ESG, "impact" is a unique concept that isn’t found in mainstream finance. It is attracting more attention as an evaluation tool alongside traditional measures like risk and return.

Impact finance can trace its roots back to ethical investing encouraged by religions including Christianity in the 1920s but the term impact investment was first used in 2007 at an conference hosted by the Rockefeller Foundation in the United States.

Since then international accords like the United Nations Sustainable Development Goals (SDGs) and the Paris Agreement have been tailwinds driving change, with more companies signing up. Assets under management in 2019 for global impact investing was about $505 billion, according to The International Finance Corporation. It estimates that investor appetite is as high as $26 trillion - $21 trillion for publicly traded stocks and bonds, and about $5 trillion for private markets.

The role of Impact Finance in financial markets

Impact finance covers both investing including stocks and financing such as loans.

But it's different from the broader category of ESG. The Global Steering Group for Impact Investment (GSG) states that ``while ESG investment aims to maximize long-term profits and reduce risks while taking environmental and social impacts into account, impact investment is intended to contribute more directly to solving specific social issues."

Several different frameworks capture this area, the UN’s Environment Programme Finance Initiative (UNEP FI) created a "positive impact financing principle" in 2017 to achieve the SDGs. It adopts four pillars: definition, framework, transparency and evaluation, in an effort to provide a common language for the industry.

As an evaluation tool, UNEP FI created an "impact radar", in 2018. It encourages companies to consider the positive and negative impacts of their products and services. Across 22 impact categories and three themes.

According to the GIIN annual survey, the global balance of impact investments was approximately $715 billion at the end of 2019. The survey found that nearly 40% of respondents had already started such investments as of 2007. The most popular asset class was private debt and listed stocks, by investment destination, North America and Europe took the lead, and by sector it was energy, finance and forests.

According to the 2020 annual survey by the GSG National Advisory Board, the potential size of the impact investment market in Japan is 2.64 trillion yen (USD$23.8bn), but the investment balance at the end of 2019 was 512.6 billion yen.

It also found that for impact investors, the most popular asset class was loans and bonds other than public and corporate bonds, and listed stocks. For investment destination, Japan accounted for about half of the total followed by Europe at nearly a third. By strategy, mitigation of climate change, renewable energy, health and medical care were most favored.

About 60% of respondents said that impact returns are at or above the risk-adjusted market level. Most respondents agreed that performance by impact and financial return, was as expected or exceeded expectations.

Based on the two surveys, it’s clear that impact investment in Japan has been developing at a slower rate than the rest of the world. Japan’s investment balance is also more concentrated in fixed income like loans and bonds compared to the global findings.

In recent years, Japan’s Ministry of Environment and Financial regulator have been hosting study meetings in order to promote impact finance in the country.

As in any nascent area of finance, there are several hurdles before the market reaches maturity.

In GIIN’s survey of global investors the most commonly cited issue was "impact washing," where a company or fund embellishes its ethical credentials as a marketing tool to win customers. Other obstacles included the inability to show impact results and to cross-compare, as well as the lack of a common language to reveal performance.

For Japanese investors, the most common issue was handling social impact assessment and dealing with fragmented and unstructured management approaches.

While frameworks, evaluation methods, and tools have been developed by multiple organisations in recent years, impact finance has a short history and its methods are not widely accepted or understood.

The key to developing it further rests on ensuring the quality of goals and accumulating more data, examples, and research.

Having external experts review the results of impact evaluations drives quality. The Green Bond Standard being developed in the EU recommends creating a system to register and supervise evaluation bodies for green bonds.

Establishing a system for public bodies to approve impact finance may also ensure quality. The EU is promoting the development of eco-labels for financial products while the Hong Kong Quality Assurance Agency operates a green and sustainable finance certification system.

A further challenge relates to impact reporting, which is currently implemented in a patchy fashion. And as the types of impact are so diverse, disclosure methods are not unified inhibiting investors from making easy comparisons.

Industry bodies should develop a harmonized framework for impact reporting and some work is already underway in this area.

The World Benchmark Alliance (WBA), was formed in 2018 to develop indicators to judge performance against the SDGs by 2023. It recognizes the need to change the way impacts are measured to motivate companies to play their role.

As part of this effort, in January 2020, the WBA revealed the 2,000 most influential global firms to achieve the SDGs across seven key areas: food, decarbonization and energy, circular economy, digitization, finance, urban infrastructure and social.

Finally, imagine if every company's ESG program was quantifiable? A glimpse into the future of impact finance was recently unveiled in a study led by Harvard Business School Professor George Serafeim on "impact-weighted accounting." Serafeim's methodology measures positive and negative impacts on the environment and society, replacing them with monetary values, and reflecting them in company financial statements. 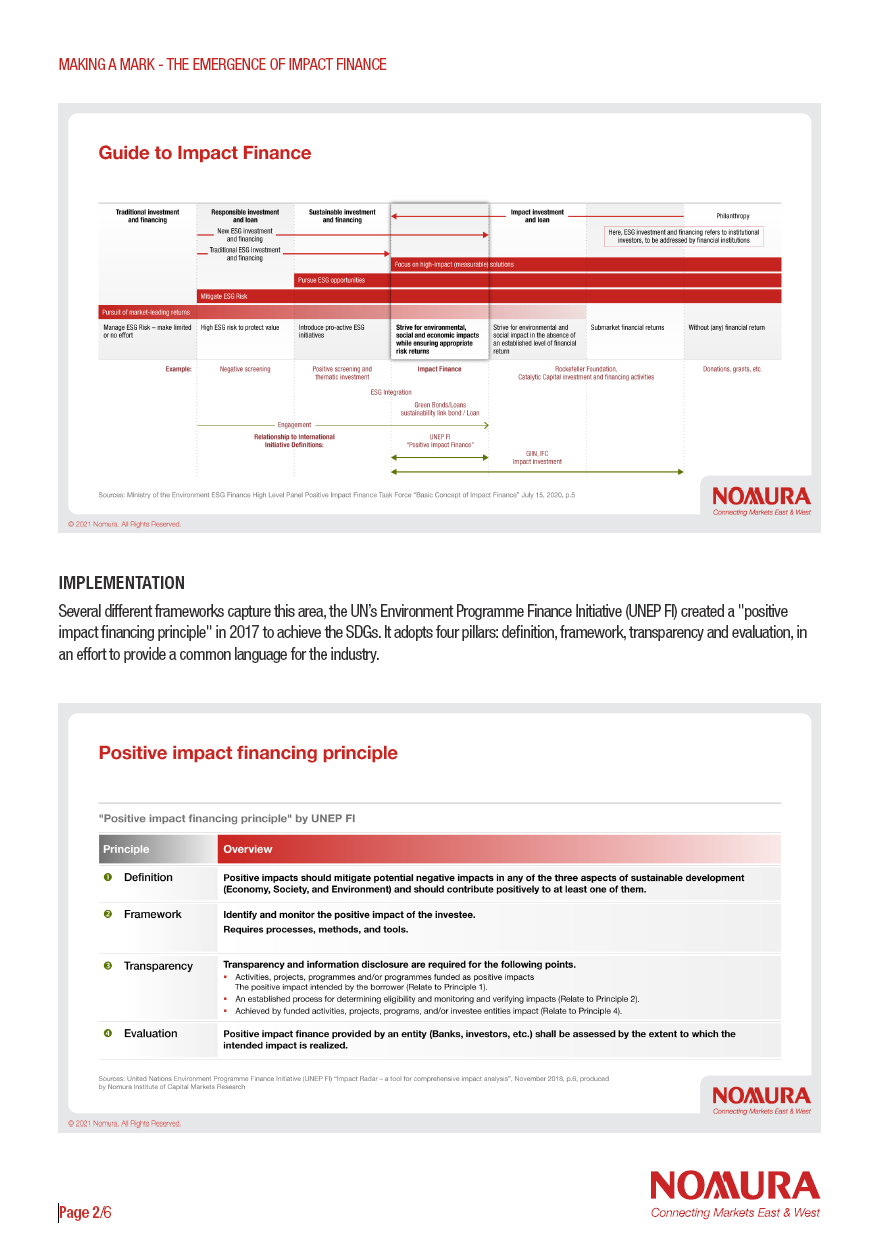 What's on the horizon for the global economy?